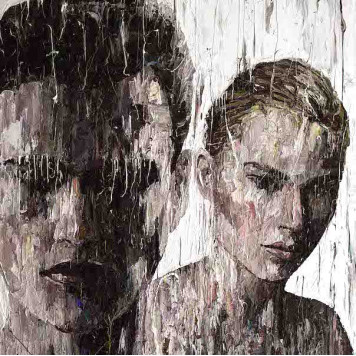 In the 1980s, while at university, and before the internet was invented, I was tasked with writing a comparison essay on Cézanne’s ‘Grand Baigneuses’ and Seurat’s ‘Bathers at Asniéres’.  I took the train up to the National Gallery and sat in front of both these monumental paintings for a long while making notes and asking myself why is Cézanne called the father of modern art and what makes these paintings pivotal in the history of art?      I looked at technique, composition, colour and the figures. I bought postcards of them in the shop for reference back in my bedsit, where I went to write up my notes.  I knew nothing much about the artists at the time; how long they had taken to paint these masterpieces, or what models they had used, it was a purely raw and naive visual comparison. 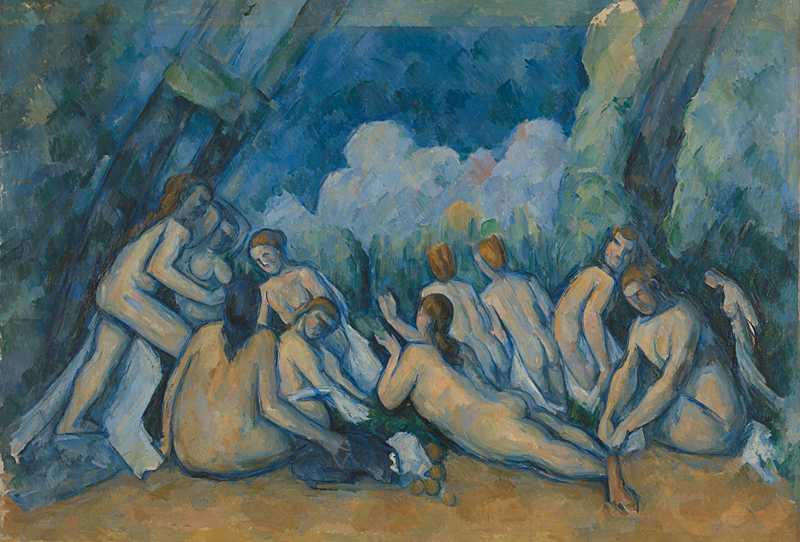 Looking at these paintings again 40 years later, with a more mature and educated eye, you can see their influence on artists such as Picasso particularly with regard to the figures.  In Cézanne’s painting, the figures, which he partly copied from paintings and statues in the Louvre, are quite classical female nudes, loosely painted and partially abstracted so that they merge with the naturalistic landscape.  The figures as a whole are composed with their backs to us in a triangular form, like a mountain.   Whereas in Seurat’s painting the figures are weighty and solid, spaced apart in a semi industrial landscape. 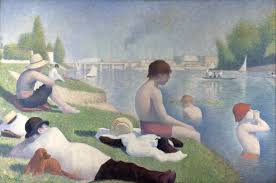 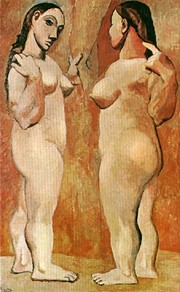 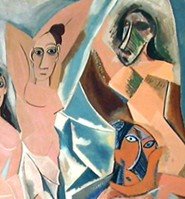 In the 1920s and the 1930s, many figure paintings were society related, such as the fauvist and German expressionist inspired portraits of Kees van Dongen or the colourful, sensuous paintings of Matisse.  Figures are depicted in velvet and silk in their finery in domestic situations or at leisure, by the beach or in beautiful gardens. 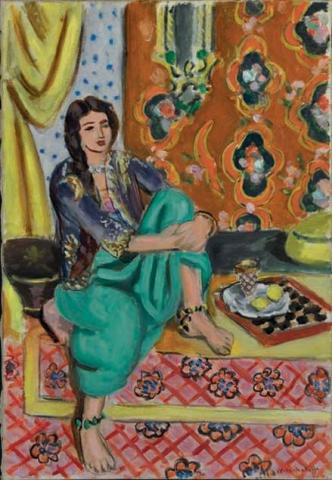 Already by the late 1930s artists such as Picasso, were treating figures very differently.  War, or specifically the Spanish Civil war, was having an influence.  Figures, such as those depicted in his masterpiece ‘Guernica”, painted in 1937, become tortured splintered forms, full of suffering and isolation.  ‘Weeping Woman’ of the same year, which is in the Tate, is a good example of an anti-war painting. 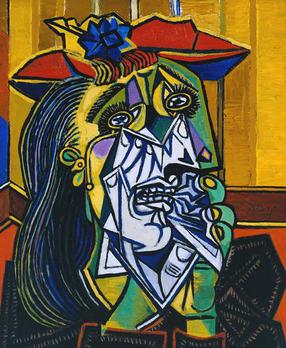 It seems that as the century progresses the figure in art becomes either more abstracted, distorted or gender neutral, with men and women equally depicted.  At the cutting edge of art, in the work of Francis Bacon, the figures are contorted and viceral and appear to be in pain. 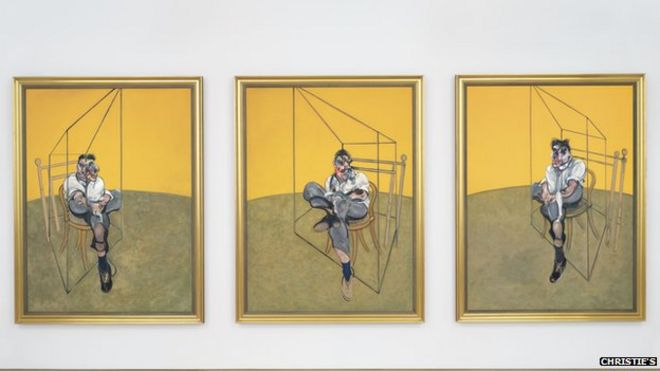 Or in the work of Frank Auerbach, they become obscured in layers of paint, so that they appear to emerge from the impasto.  The sculptures of Henry Moore depict draped figures with tiny heads. Sculpture by Alberto Giacometti depict tall, homogenus emaciated forms, while those of Lynn Chadwick have spindly legs and mask like heads. 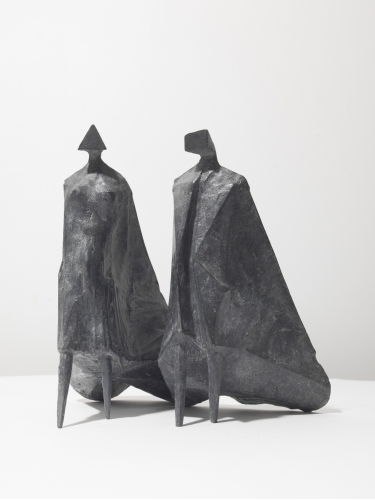 The possible exception is Lucien Freud, whose paintings owe a lot to the sensuality and composition of Cézanne’s work. His depiction of fleshy tones has been a huge influence on YBA Jenny Saville. 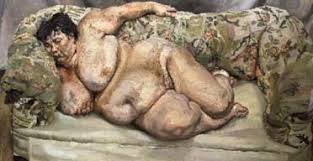 In the 21st century, there is a dearth of figure painting, perhaps because it is not taught as rigorously in art school as it was. However, Eileen Cooper, Anthony Gormley are noteworthy.

Little did I know when I wrote that essay all those years ago, that I myself would be curating an exhibition on ‘Figures in Art’.  I do hope you enjoy it!

We are delighted to show four artists who have studied figures and faces closely.  The wonderful thickly painted figures of Carl Melegari, whose use of paint is sculptural, and quite edgy.

The figure paintings of John Henry, whose paintings of crowds in a built environment show the influence of photography and movement and whose life drawings herald his desire to further explore the human form.

The paintings and drawing of Lorraine Houston, who shows us the human figure from a different view.

The paintings of Liz Duff, whose charming depictions of human interactions evoke a nostalgia of happy times.

The quirky bronze by Mick Ponting of a crouching man.