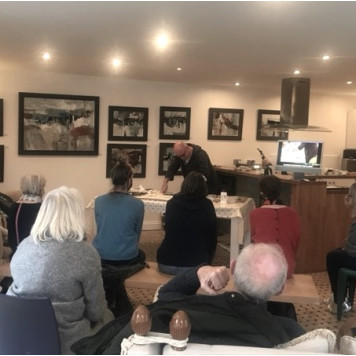 I was delighted that Pete Monaghan was able to come and give a demonstration of his practice in November 2021.  This free event was oversubscribed, but eventually I was able to accomodate 15 art lovers in a socially distanced way by relaying the demo on a monitor so that everyone could see.

Pete came prepared and immediately put everyone at their ease and there was much banter and laughter.  He emphasised that it was important to have fun when creating and that a playful attitude could contribute to a successful outcome.

Firstly he showed us his amazing drawing skills by outlining a composition in charcoal without lifting his pen from the board.  He used his concertina sketchbooks as a starting and reference point, drawn during a recent trip to Scotland.  He then added tone using a brush and water to show areas of dark and light.

The second stage was to add collage and using ripped up pieces of cardboard, coffee cups and ordanance survery maps he starting placing them. He emphasised that it was important not to place them in too obvious a position as this would make the finished painting look twee. Normally this would then be put aside to dry, but Pete had bought one he had prepared earlier so was able to show us the third stage of the process.

He chose, mixed and applied rich colours of acrylic and applied them with a brush.  Diluting and strengthening them according to the tone he wanted to achieve.  The result was layers of lights and dark in the finished painting.

Throughout the demo, Pete very happily interacted with his audience, answering questions and having fun.  It was a very enjoyable and popular event and we were very lucky to see this in the Cotswolds as his workshops in Scotland and Yorkshire are heavily subscribed. 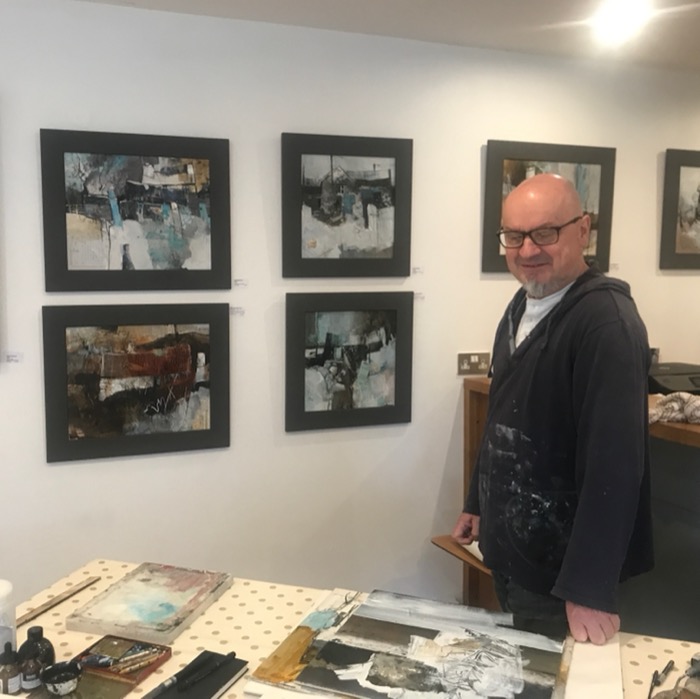