We value our landscape more than ever now that we are facing the reality of losing it to climate change or development.  In the UK, we particularly value our Great British summer, which is long anticipated after a dark wet winter.  As John Steinbeck wrote ‘What good is the warmth of summer, without the cold of winter to give it sweetness.’

The reality is often very different.  The sunshine that we crave, the pleasure of warmth in the garden, the longer days, larks rising in the twilight and newly cut grass might only be ‘a charlatan in place of the warm balmy nights I dream of in April’ (F Scott Fitzgerald) but  when we do get a perfect day, the memory of it can sustain us long into the winter.  Part of our romanticism for summer has been re-inforced by paintings and imagery; the Haywain, tennis on the lawn, cocktails on the terrace, or the shade and cool of dark woods, or a field of waving poppies.  This feeling of nostalgia and our love of summer landscapes started primarily with the work of John Constable. 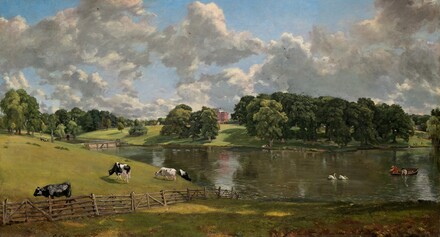 The 19th century saw an extraordinary flourishing of English landscape painting and for the early part of the century Constable was at the forefront.  He chose to paint the landscape he saw rather a romanticised version of Rome or Venice, with the usual ruin. With a talent for sketching from childhood he had been influenced by the Welsh artist Richard Wilson (1713-1782).

He found landscape it itself, which was devoid of people and buildings, too morose.  ‘His nature was peculiarly social and could not feel satisfied with scenery, however grand in itself, that did not abound in human associations. He required villages, churches, farmhouses and cottages.‘   Charles Leslie (his friend and biographer).

Constable made many sketches and paid particular attention to clouds and their formations, taking a scientific interest in meteorology.  When he was elected to the Royal Academy in 1829 he delivered lectures on the history of landscape painting which were very popular.  His three main points were: firstly, landscape painting is scientific as well as poetic; secondly, the imagination cannot alone produce art to bear comparison with reality; and thirdly, no great painter was ever self-taught.

Constable and later J M W Turner profoundly influenced the work not only of many subsequent British painters but also of many other American and European artists, such as the Brabizon group.

It evokes a pleasant, sunny summer’s afternoon in a British garden 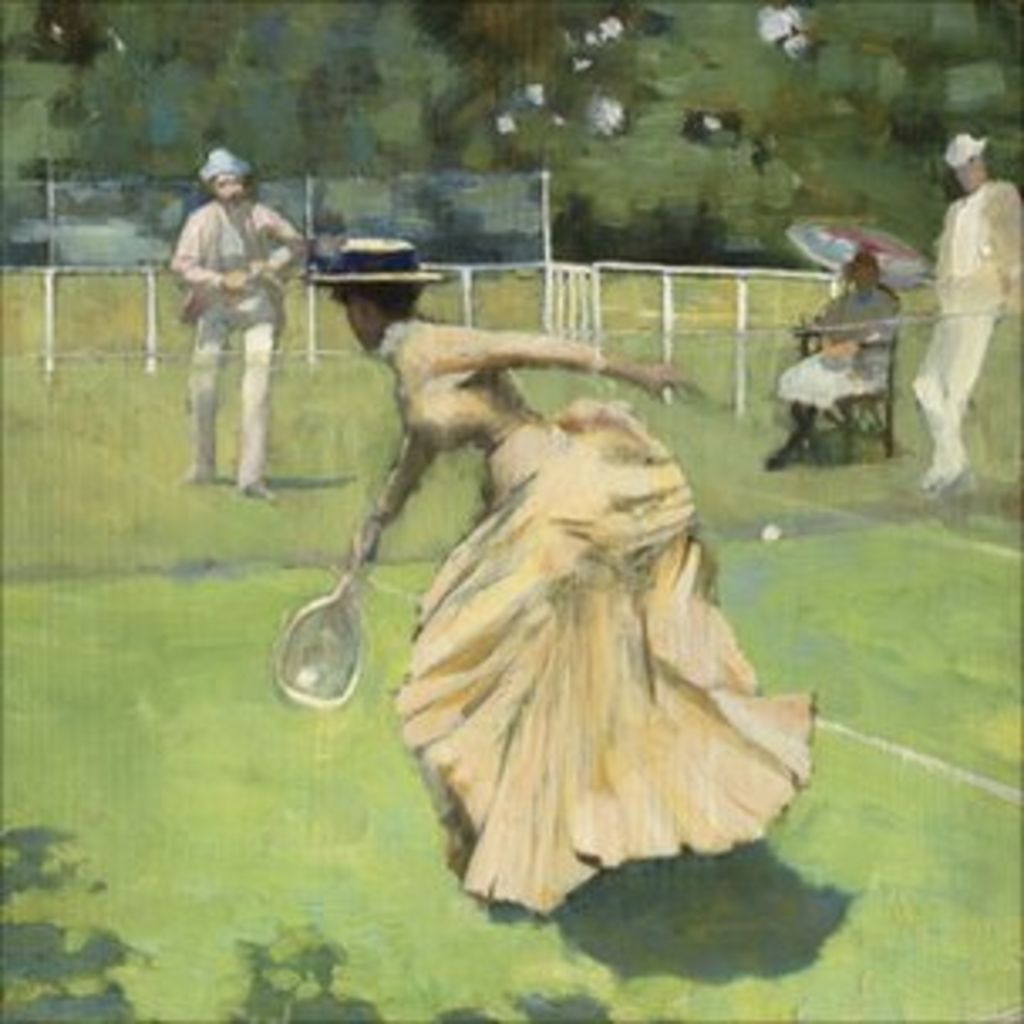 It is amazing how fast British landscape painting advanced in the 19th century.  The Irish painter Sir John Lavery (1856 -1941) was considered avant-garde when he painted this scene of the new lawn tennis game in 1885.  The looseness of brushstrokes and the movement of the player were techniques he learnt in Paris prior to his visit to Glasgow.  It must be one of the first great modern sporting paintings, along with Degas’s paintings of racehorses.  Above all, it evokes a pleasant, sunny summer’s afternoon in a British garden.  For me Lavery’s use of light, shade and domesticity became the forerunner of the New English Art Club. 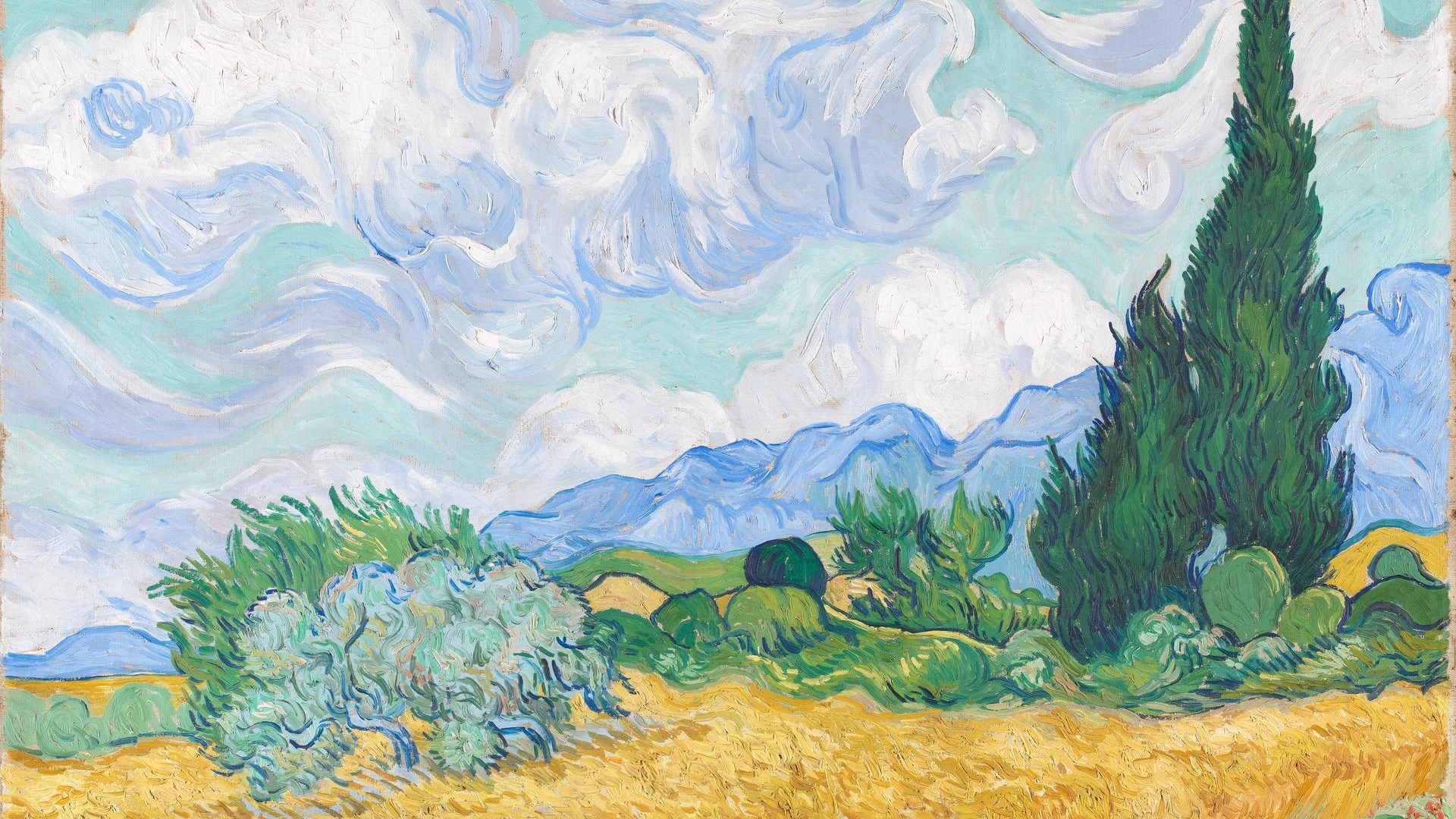 Only 4 years later, when Vincent van Gogh was recovering in an assylym at Saint-Rémy in the south of France he painted this extraordinarily exurberant painting of a wheatfield.   The strong mistral wind is reflected in the flowing brushstrokes and the whole painting exudes vitality.  Little did he know how uplifting and inspiring his paintings were to become to many landscape painters of the 20th century, particularly in his use of brilliant colour.

Scottish artists studying in France at this time, and at the time of  the Fauvists (1904-1906), learnt to use this brilliance of colour back home, smashing the Victorian taste for ‘brown’ paintings.  The Scottish colourists, like Cadell and Peploe still have an influence on Scottish artists today, such as Barbara Rae .

This use of different media to add atmosphere to a painting is still very much in use today.

After seeing an exhibition of her work in Edinburgh, I am a fan of Joan Eardley, another Scottish artist who was painting in the middle of the 20th century.  Her beautiful wild summer landscapes are so expressive and immersive.  One of a wheatfield, painted in the 1960s, which is currently in the National Gallery of Scotland, even has an ear of wheat painted in to the canvas with oil, giving it texture and body.  This use of different media to add atmosphere to a painting is still very much in use today.

In our current exhibition of Summer Landscapes, we can see how artists achieve texture in their landscapes, for example in the paintings by Jenny Graham where she uses cold wax to give the surface more body.

A different perspective is also brought to landscape in the oil paintings of Conrad Clarke, who eschews true colours to depict the landscape with augmented and heightened colour, helping us to see the landscape in a totally new way.

Also offering a unique perspective are the abstracted summer landscapes by David O’Connor, who sees the land topographically, with it’s wheatfields and copses, and ancient routes and tracks only visible from the air.

While summer landscapes are by no means confined to the rural, here in the Cotswolds when we drive through the lanes and villages, we often see some breathtaking views.  Betty Harrison is adept at capturing the drama and atmosphere of the countryside in her fine paintings: