The Fascination of Trees in Art

I hope you enjoy our current online exhibition “Trees”.  There is something so special about trees.  They outlive us humans by hundreds of years and stand for continuity, security, strength, stability, community, wisdom and generosity.  Artist’s are drawn like magpies to their symbolism, as well as their complex structure; their leaves and branches offer a challenge.  Trees are so generous, giving us colour with the seasons, oxygen, shade, wood, paper, fuel.  So intwined in our mythology are they that we all have a favourite tree or memory from childhood.

Trees have become increasingly meaningful in our society as their premature destruction in the rainforests seems to have led to climate change which affects us all.  Not only that but a number of diseases have threatened such familiar favourites as the Elm and in recent years the Ash and Horse Chestnut.  Faced with their extinction, we have a heightened awareness of their importance and respect for them as a species and this is reflected in art.

In the mid 18th Century, part of the new garden ideal, popularised by William Kent,  was to plant groves of trees to naturalise the British landscape.  Around this time many unusual specimens were brought from the four corners of the globe to English Country houses and remain here to this day such as Lebanon Cedars.  Including trees in your portrait could therefore symbolise your wealth and prosperity, for example in this portrait by Gainsborough 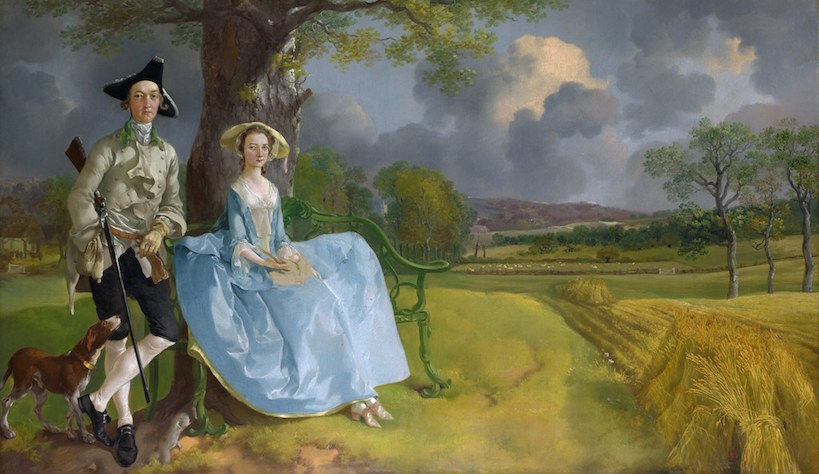 In the 19th Century,  the nordic painter Carl Caspar Friedrich, whose romantic interpretation of the landscape was an antidote to the Industrial revolution, was a big influence on British art.  His ‘Tree of Crows’ illustrated, sees an oak bending in desperation in the the wind as though it had character.  Old folk songs like ‘The Ash Grove’ which were hugely popular in the 19th century, affirm the romanticism of trees at this time. 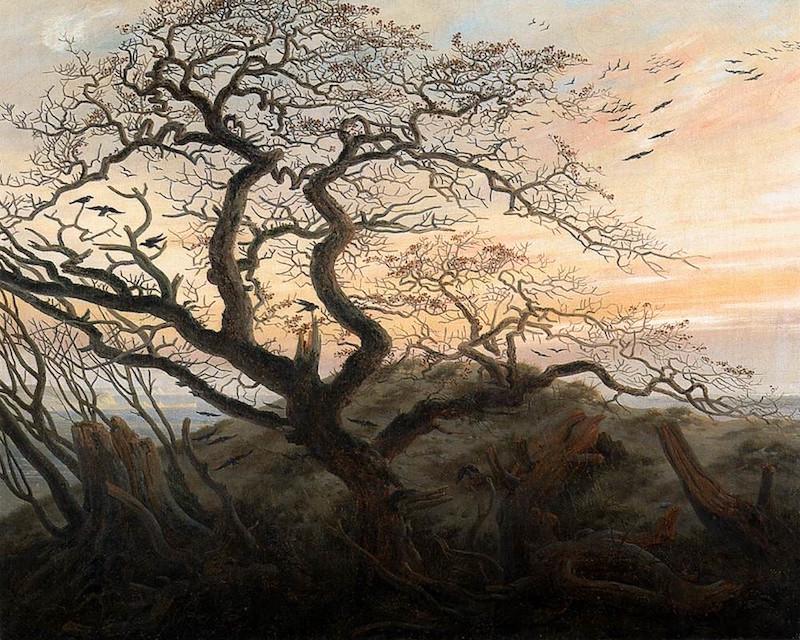 Another painting which has always stayed with me is ‘The Long Engagement’ by pre-raphaelite Arthur Hughes from the mid 19th century.  The meeting of the affiancés should be the main subject but it is the tree which stands out.  Their favourite tree, painted in incredible detail, with their names carved in the bark, but overgrown with ivy and moss has become the symbol of ‘The Long Engagement’ more than the look of disappointment on their faces.

The 20th century was dominated by war, revolt and modernism.  WW1 was a huge shock after the politeness of the cultivated Edwardian era. The war artist Paul Nash poignant painting of 1917 ‘We are Making a New World’,  with his vision of tree stumps without a leaf or branch on them, brought home the utter destruction of war in a stark and graphic way.  The conquering of machinery over nature is shown as a bleak new world. 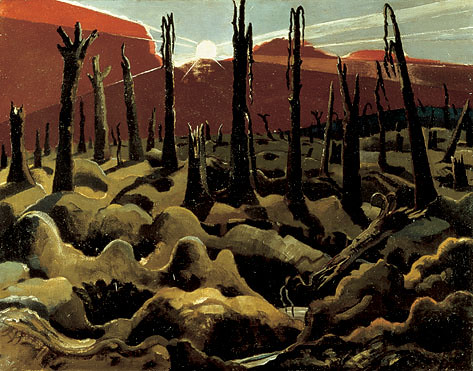 ‘The vision of tree stumps without a leaf or branch on them, brought home the utter destruction of war’

In the same year Gustav Klimt painted ‘Four Trees’, 1917, showing the four seasons in one go - a rather more optimistic, manipulated view of the world, but one which is much more palatable.

It is only towards the end of the 20th century that we see trees depicted in major works of contemporary art, largely in sculpture.

Hockney’s return to England after a long period in California in the late 1990s led to an appreciation of Copses in his native Yorkshire, such as Woldgate Woods, and eventually a series of large oil paintings.  These colourful monumental works were exhibited at the Royal Academy in 2012.  They proved enormously popular amongst an increasingly perverse, shocking, and monotone field of contemporary art.

Another artist, who quietly took the art world by storm in the late 20th century is Scottish artist Andy Goldsworthy.   Many of his beautiful ephermeral instalation sculptures of the natural world only exist now in photographs. I recommend his book ‘Time’ published in 2000 by Thames and Hudson.  He used natural patterns of leaves or natural dyes to mark and sculpt tree roots and photographed their natural degeneration over time. 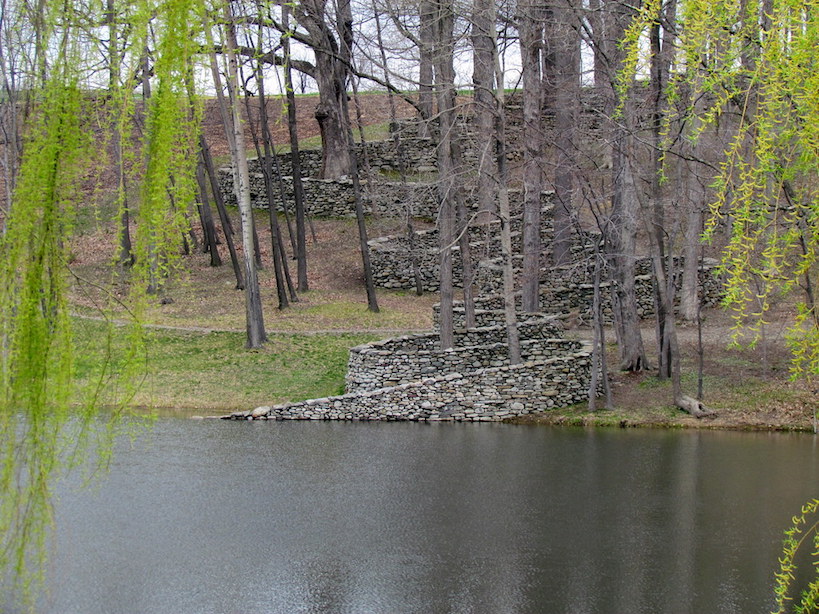 I was lucky enough to attend the unveiling of this sculpture by Bill Woodrow in 2000 for the fourth plinth in Trafalgar square.  Called ‘Regardless of History’ it depicts a tree engulfing a giant book and the head of a man.   It makes us think about wisdom and the growth of human knowledge when dwarfed by nature and the supremacy of nature over human achievements. 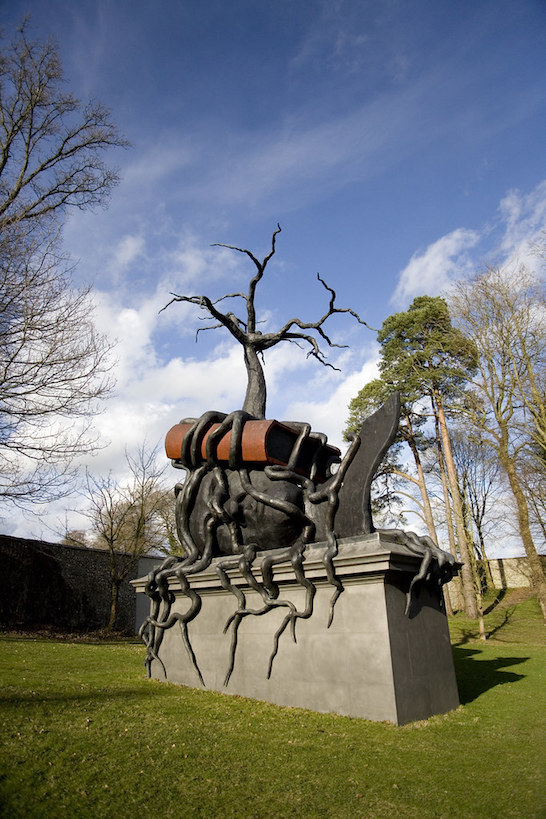 Photo credit: "Bill Woodrow - Regardless of History" by Cass Sculpture Foundation is licensed under CC BY-NC-SA 2.0

In more recent times Ai Wei Wei bolted together and reassembled different tree parts which he bought from markets in China to form his installation ‘Trees’.  Some of you would have seen this in the courtyard of the Royal Accademy, London in 2015.  The different tree parts represent an amalgamation, from different cultures within China, coming together to form a whole.

It makes us think about the supremacy of nature over human achievements.

What of recent paintings?  I must mention Peter Doig, whose mix of post-impressionism and romanticism has led his paintings to be some of the most expensive sold at auction by a living artist.  He often uses trees as a magical backdrop or as a screen to spy on the modern, man made world. 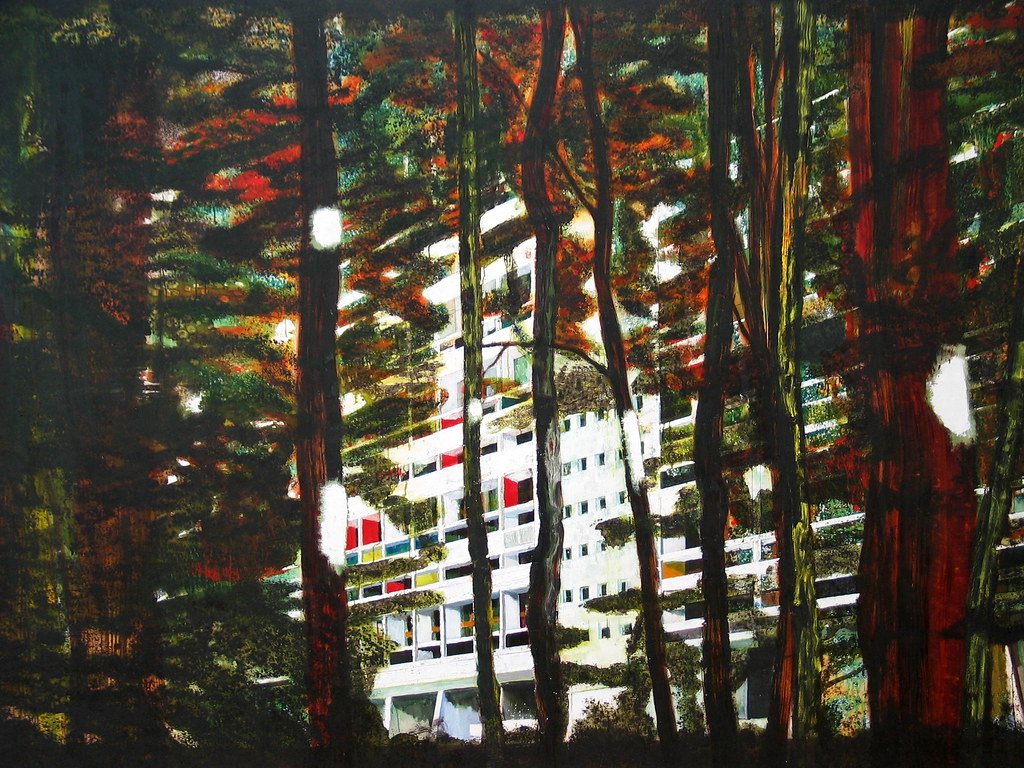 Artists have focussed on the symbolism of trees for political and environmental causes but also for their colour, wildness and beauty.  The subject of trees has also been a peg on which an artist can hang ideas of time passing and hope for the future.

In our current exhibition of Trees we are delighted to have paintings by Conrad Clarke, whose detailed and other worldly paintings of trees are full of colour and tone.  Conrad is currently Jackson’s Art Prize ‘Best Emerging Artist 2020’

A wonderful painting of a Winter Oak by Jane Overbury with a very opalescent sky.

The ever popular paintings of Janet James, whose mark making and use of colour give a very contemporary look.

Also included are the oil paintings of John Henry, whose trees provide structure and literal roots for an urban landscape.

There will also be work by other gallery artists included.

We are delighted to have guest artists, Ange Mullen Bryan and Mike Ibbotson who have kindly contributed to this exhibition:

Ange’s paintings have a distinctly nordic feel and evoke the trees as fairytale characters.

Mike’s instinctive feel for the landscape is combined with his architectural drawing skills.  His paintings of pollarded willows capture the essence of the Cotswolds in a modern way.

The exhibition ‘Trees’ will go online at noon on Tuesday 1 September and all works will be available to view and to buy, either online or by appointment.  We hope you enjoy this online exhibition.