It is with great sadness that I learnt of the death, earlier this month, of Mick Ponting.

Mick was such a character; a former polo player and vet with a special interest in equine veterinary, his sculpture came late to him in life and was heavily influenced by trips to Mongolia and cave paintings such as those at Lascaux.

His sculptures were carved from local limestone, or wire modelled with plaster and cast in bronze by the Pangolin foundry in Stroud.   A world leading foundry known for casting work by Damien Hirst, Lynn Chadwick and others.

I first came across Mick in 2018 when he was doing a life drawing class nearby and a mutual friend introduced me to his work.  I liked his sculpture immediately.  Knowing so much about the anatomy of horses, he could have easily done an accurate rendition of the horse, but his spindly, kicking horses and his weighty bison, have a modernist feel, more akin to the work of Alberto Giacometti.

His interest is maintaining ancient breeds of horse, such as Przewalski's horse and his legendary trip to Mongolia combined with his interest is Bison, which he visited in the USA and his love of the ancient; whether it be stone or animals, or cave paintings lent extra meaning to his sculpture.

In his ‘Saxon Doorway’ (illustrated here) he combines ancient with modern in rough hewn cast bronze alongside a highly flat polished side.   He was thrilled when this particular sculpture was exhibited in Cornwall alongside work by Barbara Hepworth.

Mick had a zest for life, an intelligence and originality and was lucky enough to have a large loving family and my deepest sympathies are extended to them at this time. 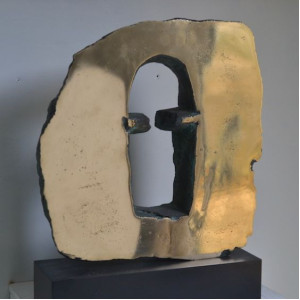 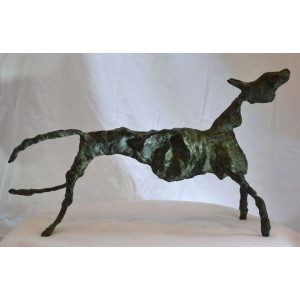